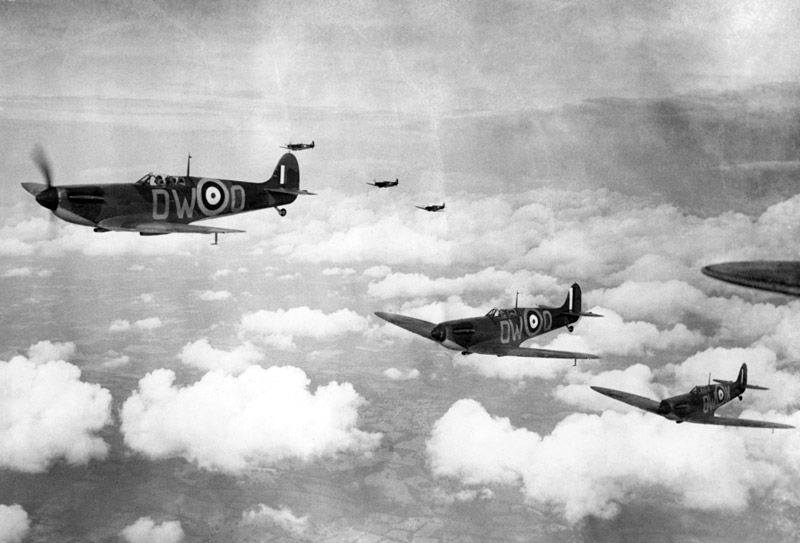 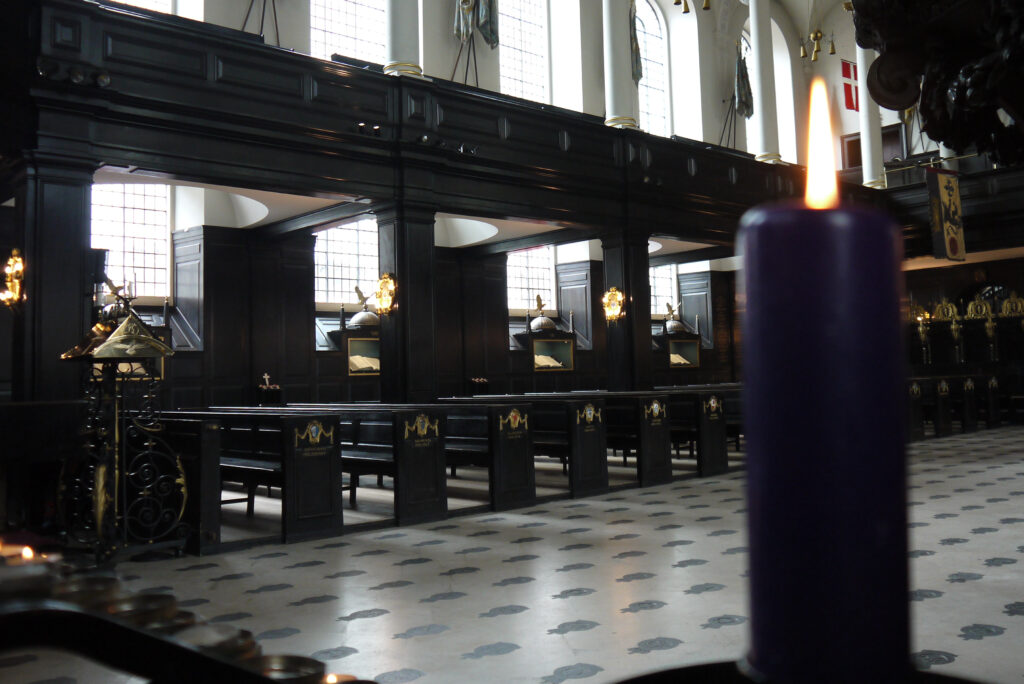 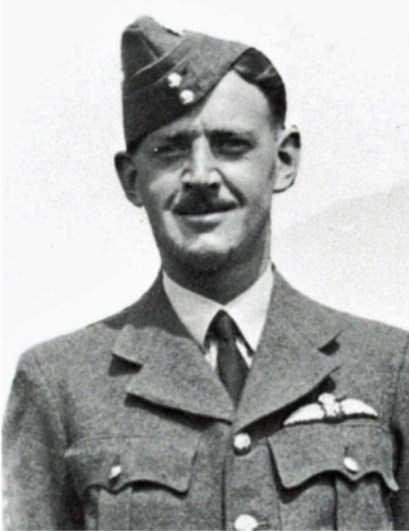 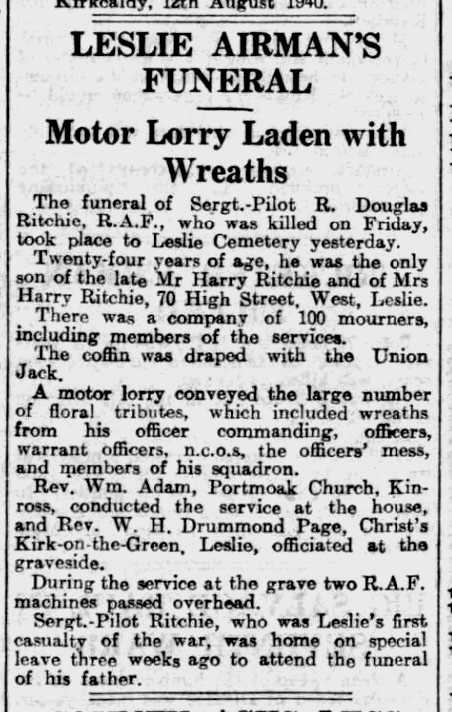 Sergeant Pilot Robert Douglas Ritchie was born in 1916, the only son of Harry and Georgina Johnston Ritchie from Leslie, Scotland. He had one sister, Jessie.

He joined the RAFVR (Royal Air Force Volunteer Reserve) in April 1939 as an Airman u/t (under training) Pilot. He was called up on 1st September 1939. He completed his training and was serving with 605 ‘County of Warwick’ Squadron, based on the southern shore of the Firth of Forth at Drem in early July 1940 when the Battle of Britain began.

He often patrolled within sight of his home near Loch Leven, but during a section patrol off the east coast on 9th August 1940, Ritchie called up, reporting that he had a glycol leak and the fumes were making him drowsy.

He crashed into the sea one mile off Dunbar, East Lothian in Hurricane L2103, sadly breaking his neck on crashing. His body was picked up by the motor yacht Eunmara.

He is buried in his family grave at Leslie Cemetery. 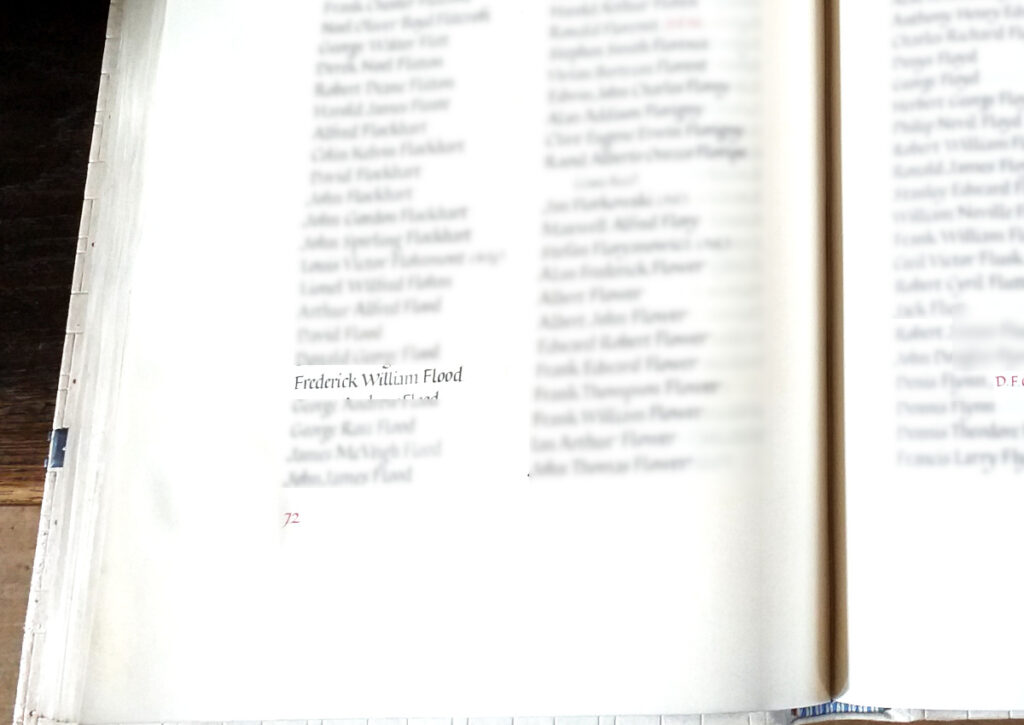 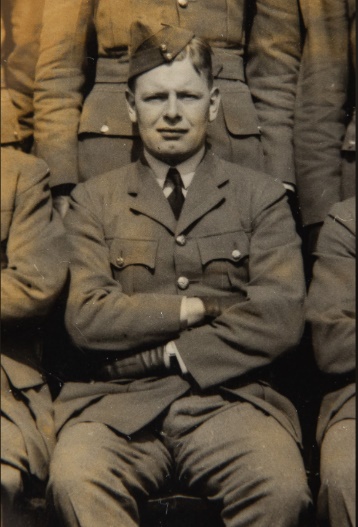 Pilot Officer John Arthur Joseph Davey was born in Leamington, Warwickshire in January 1920, the only child of Arthur Hammond Davey and Elise Marie de Normanville. He joined the RAF as an Aircraft Apprentice in August 1936 aged just 16. He passed out in July 1939.

Davey went on to RAF College FTS Cranwell on 10th April 1940, where he was awarded a cadetship. With the course completed on 14th July, he was granted a permanent commission and joined No. 1 Squadron at Tangmere the following day, the 15th July. On 19th July, John flew his first flight in a Hurricane and just 7 days later, on 26th July flew his first operational sortie.

Sadly, Davey was shot down by gunfire from a Messerschmitt Bf110J. He was killed when his plane burnt out whilst attempting a forced landing at Sandown golf course.

He is buried at Shanklin Cemetery on the Isle of Wight. The inscription on his grave is “Light Shine on Him. Thy Kingdom Come, thy will be done.” 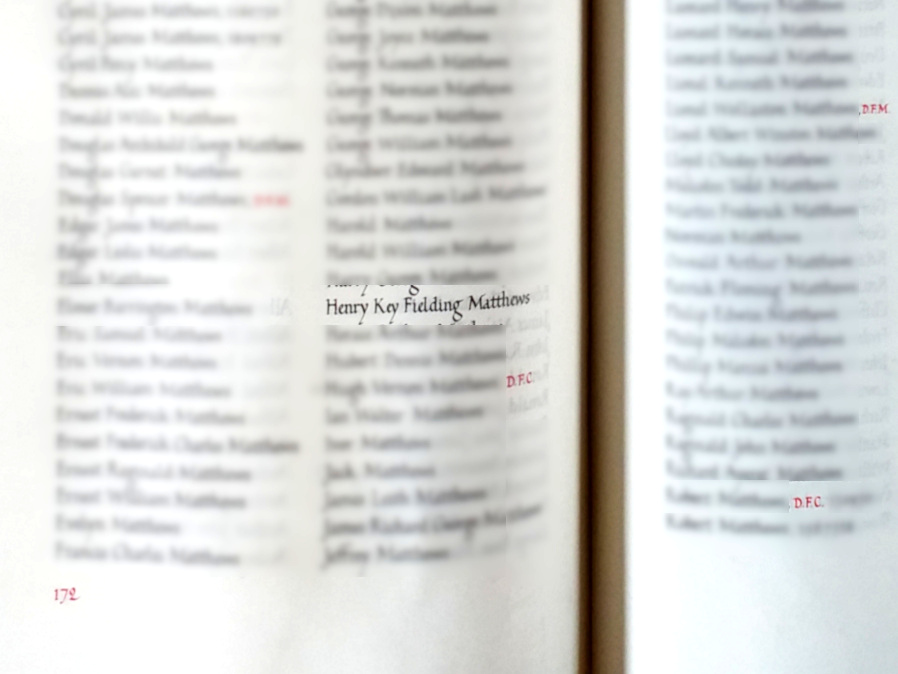 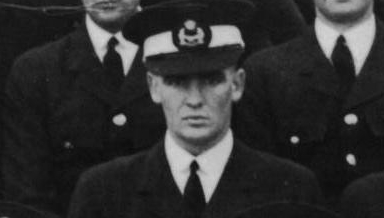 Frederick William Flood was born in Roma, Queensland, Australia on 18th March 1915 to Caroline and Edward Flood. Roma is a remote area, mostly of agricultural land and a landscape very different to that which Flood would have experienced in England.

He carried out his flying training with the RAAF at Point Cook in 1935 and sailed for England in January 1936 to take up a short service commission.

On 6th March 1936 Flood was posted to 32 Squadron at Biggin Hill. He moved to 8 Squadron at Khormaksar, Aden on 24th October 1936. Flood was appointed PA to the AOC British Forces in Aden on 4th April 1938, returning to his squadron on 18th October.

When 235 Squadron was formed at Manston in October 1939, Flood joined it as a Flight Commander. Over Dunkirk on 1st June 1940 he damaged a Heinkel 111 and on an escort operation to Le Havre on 21st August he shot a Henschels126 reconnaissance plane down into the sea.

Three days later his Blenheim was damaged in an attack by Hurricanes of No 1 (RCAF) Squadron over Thorney Island. Flood escaped with minor damage to his aircraft, but another Blenheim was shot down and its crew killed. It was the Canadians first operational sortie.

On 11th September 1940 Flood led six Blenheims of 235 Squadron on an escort operation for FAA Albacores attacking Calais. They were attacked by Me109's and Flood's aircraft was shot down. Flood and his crew, P/O NB Shorrocks and Sgt. BR Sharp, were all reported 'Missing'. 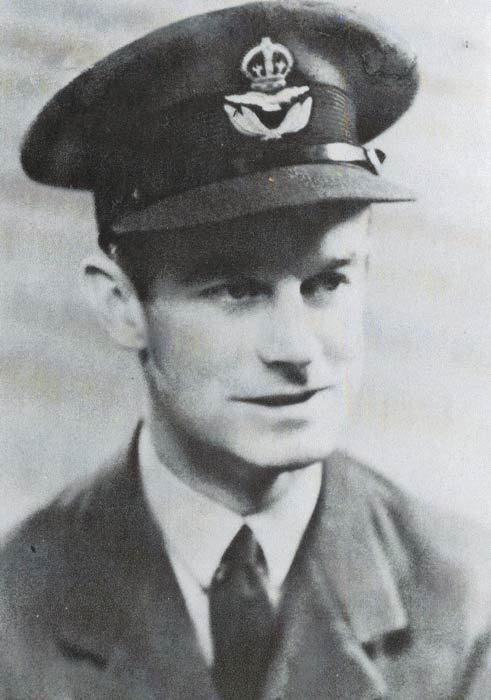 Henry Key Fielding Matthews was born 17th June 1912 in St. Columb, Cornwall. He was the eldest of three, having a younger sister and younger brother.

His father, Theodore and grandfather, Joseph had both been clergymen, moving around the country as their job necessitated.

Henry joined the RAF on a short service commission in November 1937. His appointment was confirmed as a Pilot Officer on 29th November 1938. He was posted to 9 FTS Hullavington in Wiltshire on 5th March 1938, joining 64 Squadron at Church Fenton on 17th September.

He was shot down and killed in combat with Me109’s on 7th October 1940, his Spitfire, N3109, crashed at Hurst Farm, Godmersham. This was only a few weeks after his first wedding anniversary at the age of 28. 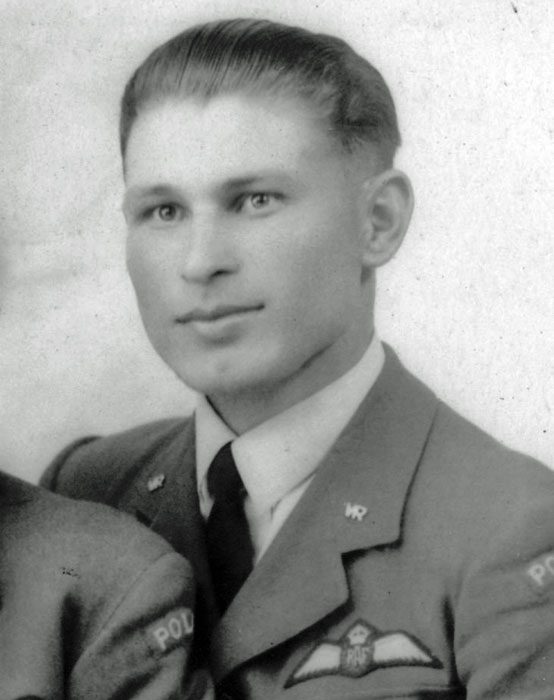 Kazimierz Lukaszewicz's name as it appears in the Book of Remembrance

Kazimierz Lukaszewicz was born on 25th March 1913 in Poland. He trained as a pilot in Poland and graduated on 15th October 1936 as a Second Lieutenant. On the outbreak of war, he was an instructor with Central Aviation Workshops (CWL-1) in Deblin, Poland.

After Poland fell in 1939, he made his way to England and was commissioned into the RAF on 27th January 1940. He was at the Polish Wing at 3 School of Technical Training at Blackpool from 1st June 1940.

He was posted to 302 Squadron at Leconfield on 26th July 1940 but it seems likely he had previously fought in France.

On 29th July 1940 his 302 Squadron aircraft was landing at Leconfield in a cross wind following his first familiarization flight on the Hurricane type. Although this was his first flight in a Hurricane, he was a reasonably experienced pilot having served in Poland as far back as 1936. The aircraft sustained some damage but he was uninjured.

On 12th August 1940 there began a systematic assault on RAF Fighter Command's airfields and radar stations, striking at Manston, Lympne and Hawkinge aerodromes in the south-east and radar installations in Kent, Sussex and on the Isle of Wight. As a result of these attacks, Kazimierz was reported 'Missing' following a combat engagement with enemy fighters west of Ramsgate in Hurricane P3803.

Lukaszewicz was awarded the KW (Cross of Valour) 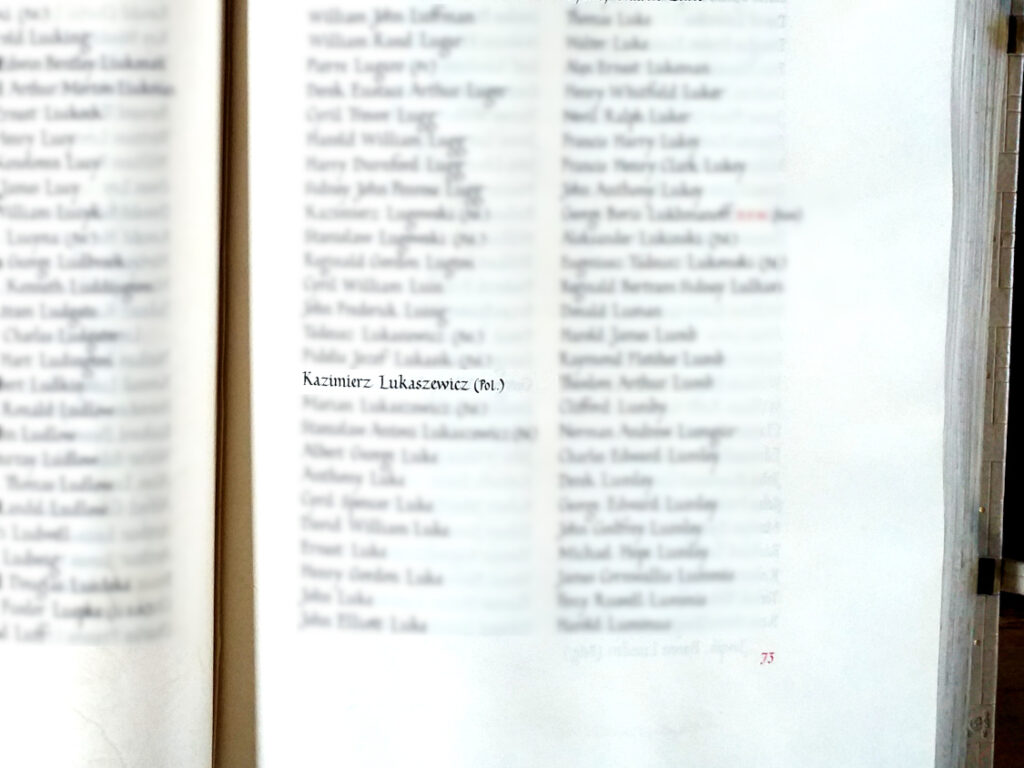 All the books of remembrance can be found on either side of the church.

A lasting testament to all who died in RAF service. 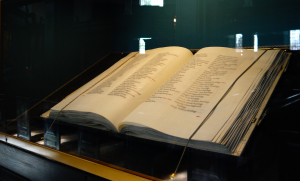